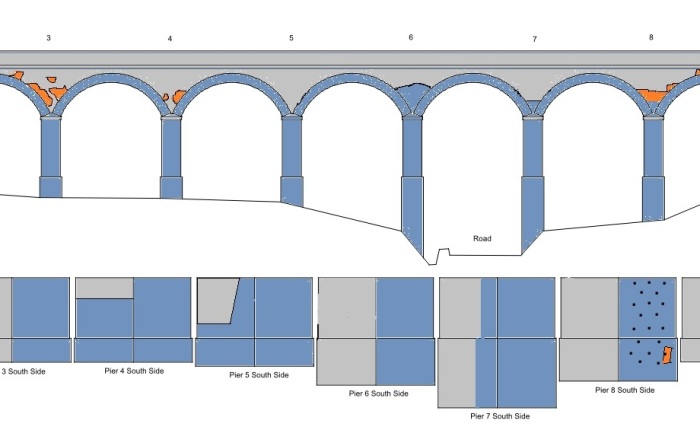 Despite the recent lack of updates there’s plenty going on in CS2 on our Wednesday afternoon and evening sessions.  This week we had a visit from two possible new members, Lance (4mm 00) and Dean (N Gauge).  Each were shown round and appeared to enjoy themselves.  Hopefully they will return. 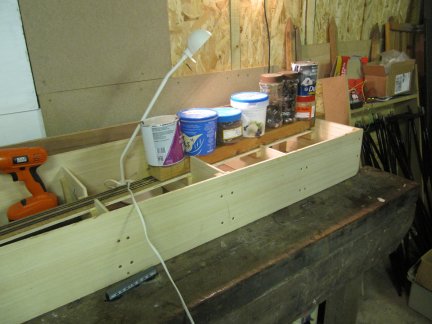 Alan and Paul R were doing some remedial track work on their bit of N gauge layout in the warmth of the workshop.  They also put together a small test rig for a Peco point motor and switch.  It’s to check that the throw is adequate and that the switch works. The test was a success.

Ratcliffe Street had its high level track removed. Nigel has decided that a redeveloped high level will give better access for loco shuffling off stage.

Peter continues to fix the foundations of some of the buildings on South Junction as well as continuing to seal up the bottom of the side wall in CS2. John S brought along some of his recently acquired EM gauge locos for test running on South Junction. Roy appeared to enjoy running them. 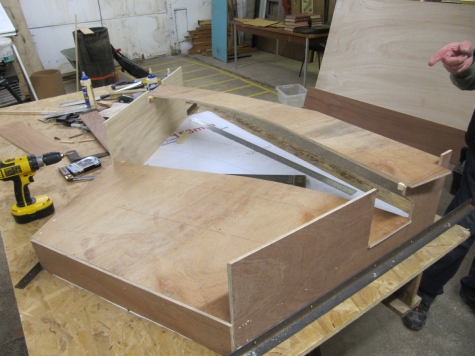 Heyno Junction (HeJ) boards continue to be produced.  Just one more board and HeJ will have a continuous circuit. Soon be cork laying time!

Much progress has been made with Evercreech New’s Prestleigh viaduct. Pictures  show the build up of the piers, with good use of the library’s facilities, and in position, culminating in the sides being screwed to the trackbed, and the inner parapet glued in held in place by just a handful of clips. Featured image today is our first attempt at a ‘map’ of what goes where on the cladding of the scruffier side of the viaduct facing you the punters – much of which will be laser etched. 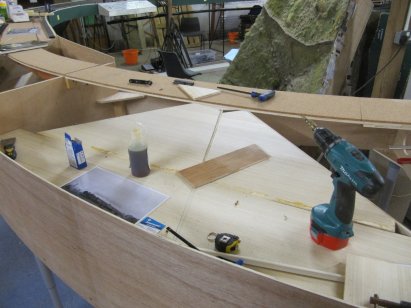 At the other end, Pecking Mill, a flat area was made for the bridge to be built on. What is required is a photo excursion to the remains of Pecking Mill to take pictures for the model to be made.

With the Yeovil Model Show looming in March, we need to check out Gas Works well before then, so, volunteers for that job please so we can make start this week.

With the AGM of the YMRG next week, I will make this my last blog for the website. I have decided to stand down at the AGM and let others take over and move the club on. It has been an honour and a privilege to be the Chairman of the YMRG. So without further ado I’ll waffle on about what we have been up to since the last blog which is not a lot really.

So what’s been going on. Well, we had a successful Ladies Evening in October with twenty-six attendees. This evening is mainly for members to show their appreciation for their partners. But it’s not necessary to bring anyone along. This year we had members bringing no partner and one bringing two! The rest of us just brought one. 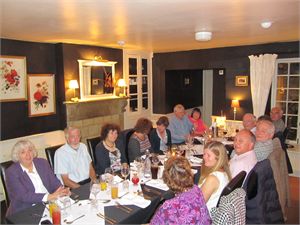 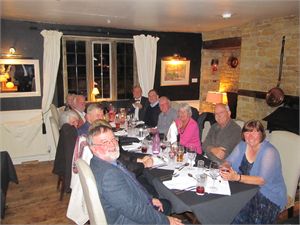 With The Summit (TS) back from its successful début at Telford the planned visit by Avon O Gauge group with their large collection of rolling stock went ahead. An excellent evening was had watching different locos and stock running round TS. TS has also been photographed for the Railway Modeller (April 2016 issue I believe). We have seen the proofs and are pleased with the results. We will put the pictures up on the website after publication. There are a few modification to be made following on from our operating at Telford. The monitors will be repositioned nearer to the control panels for ease of viewing, cameras will be repositioned to see all of the front of the layout and the starter signal on the inside track will be repositioned nearer the road over bridge. A shunting sequence is also being considered. Hopefully the mods will be done before the Taunton Railex 2016 exhibition in October. Then 4 weeks after Railex, TS goes to Warley in November.
Pictures show an incident where goods train was circulating the TS unattended while we watched at the front. “Suddenly” we had the incident with trucks strewn all over the track in the tunnel and a buffer beam left in the 4 foot. Never did get to the bottom of the problem. 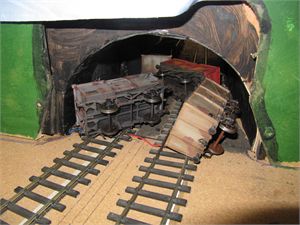 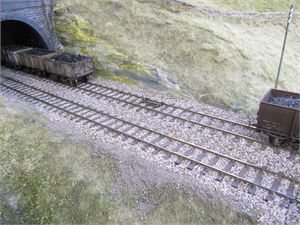 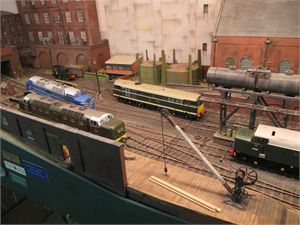 Gasworks was successfully displayed at Taunton Railex 2015 where it won the Chairman’s Shield. Very pleasing. Picture shows Gaswork’s own “diesel dawn”, a bit over stocked but impressive.

A tarpaulin curtain has been erected at the end of of the main room in CS2. Behind this screen the first baseboard for Heyno Junction (HJ) has been started. It is hoped that this screen will stop the majority of the dust generated finding its way onto the other layouts. Face masks have been provided for members working in that area. 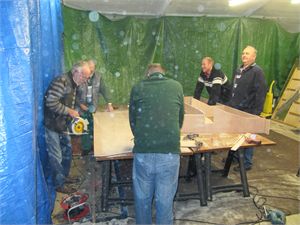 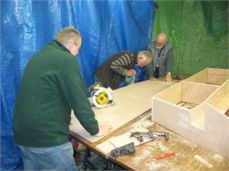 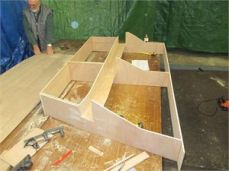 The first board under construction.

Since then we have constructed a flat board on which the boards will be built on top of full size plans. Angle iron defines the ends of the board under construction. A large saw table has also been built so we can cut the wood accurately. A large capacity chop saw, courtesy of one of the members, completes the wood cutting facilities. 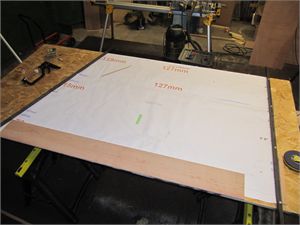 Full sized plans on which the relevant board is built. 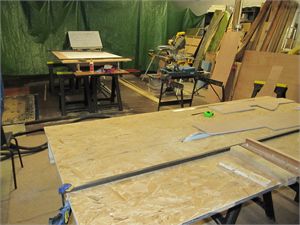 South Junction (SJ) has had a few problems lately. Why does a point made on copper clad sleepers and correctly gapped suddenly get a short on it after twenty five years. It appears that a whisker of copper had found its way across a gap after all that time. Other than that trains run each week on SJ.

The Chairman’s Cup competition is going to run this year with judging taking place on AGM evening. An independent judge will be sorting out the wining entry. The competition is to build a 7mm scale 16T mineral wagon from a plastic kit. The main object is to get a rake of empty mineral wagons for use on TS. There are other cups to be won for locomotives, rolling stock and non-rolling stock railway related items. All entries have to have been completed in the preceding twelve months. I think there will be an array of vans too as the excitement of building the mineral wagon has had an effect on the members!

Our librarian continues to sort, reorganise and consolidate the collection. I don’t think anyone needs more than one copy of a particular year’s set of modelling magazines.

Holly Junction continues to develop while trains are run. Lots of new DCC equipped stock keeps appearing and run on the layout.

Welton Down has been out being exhibited. It will return to CS2 after its electrics have been sorted out.

Yeovil Town has had some scenic work done.

Several new members have joined YMRG. This is very pleasing as it shows we have something to offer new members.

Congratulations to Jim Allwood who has been awarded Honorary Life Membership of the 2mm Scale association in recognition of his services rendered over many years.

We will be having an Open day later in the year. If you want an invitation please contact our secretary Ed – details on the website.

Well that’s about it from me. Thank you to all those who have read my ramblings. I’m sure the new chairman will continue with his own style of blog.