“South Junction” is a stretch of mainline “somewhere in England”. A deliberate strategy as it is a club layout which has to run stock from a variety of regions. By and large the stock is post-Nationalisation and pre-1965, but HSTs, Turbos, Sprinters and modern freight trains have been seen so don’t hold us to this.

An oval was chosen so that the layout could also double as a test track, its most common use these days. As originally built and as a result of the space available at the time, both up and down line fiddle yards were within the oval. This gave certain operating constraints, so when the opportunity arose a fiddle yard was added to the outside. As a result of a showing at the NEC Birmingham, the fiddle yard has undergone further revision. This being the third and final version.

Mostly dating from 35 years ago the EM gauge trackwork is mostly Ratio, with a little Peco Individulay. All the point-work on the scenic side is ply sleeper and rivet construction. The remainder is copper clad sleeper. Point control is through PFM/Fulgarex motors. Track control is by Gaugemaster.

Looking from the front the tracks emerge from tunnel mouths and pass across a viaduct. Just after the viaduct there is an entrance to a small goods yard. Further along the lines diverge at “South Junction” and disappear into further tunnels. From the end of the viaduct on wards the line-side industry increases in density toward the imagined town. There is no station on the layout. It is considered to be out of sight the other side of the tunnels. This was a choice to assist with the anonymity of location; railway architecture readily locates a railway.  The only items of railway architecture being the necessary signal boxes at the two junctions.

Signalling has only just started to happen on the layout. No-one in the Group has this as a particular interest, although we do have a plan of what the signalling should be and kits of the appropriate signals were distributed among the members.  Thanks to the magic of servos, an increasing number of the signals are being operated on the back of the point motors with interlocking to ensure that all relevant points are set before the signal clears. Watching the trains go through operating signals is even more interesting! 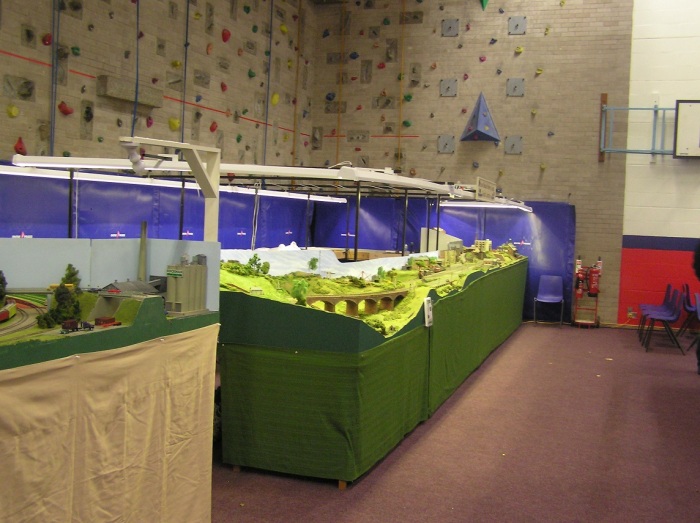 South Junction ready to roll at Taunton Rail-Ex in 2017