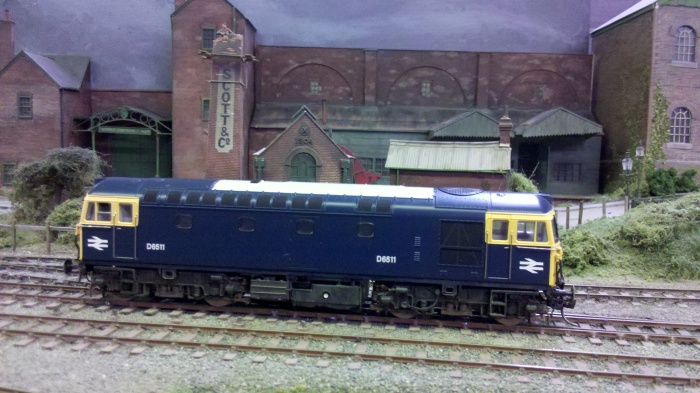 Fred who must be quite a stoic, looks down from the top of his chimney at some modern motive power.

This is a tale that began in 2005 with the purchase of a green Heljan class 33/0 for Mere.  This was a model of the engine that was repainted in BR green in the 1990s, long after it should have been green.  Mere is EM and DCC so a chip was fitted, together with Alan Gibson EM wheels – very easy.  However for one reason or another it never saw a lot of use, so I cannot remember exactly how it performed in those days, although on an end to end layout with a tight curve in the middle, top speed was probably never exploited!

Roll forward to the arrival of my 4TC unit;  the Class 33 ( not push-pull fitted) was dragged out of its plush cardboard box (with foam infill) and tried out on South Junction where it could barely drag itself along the track let alone what was then a draggy 4TC unit.  Replacing the chip with a blanking plug improved matters, but it was still slow compared with other diesels I own.  In 2014 not long after they came out I had purchased a Penbits Class 33 sprung chassis kit, so I decided to fit that and give the bogies a thorough clean and lube  at the same time.   Over Christmas 2017 I had a very enjoyable time following the excellent Penbits instructions to the letter and a smooth running chassis resulted – with the same limited top speed as before – despite the clean and relube (with some very expensive white grease).

Meanwhile Christmas had also produced a Class 33/1 in blue from East Somerset Models  that ran extremely well with a realistic top speed.  I now had a beautifully sprung green non-push pull fitted class 33/0 going nowhere fast, plus a high speed blue class 33/1.  How difficult would it be to fit the converted parts of the green 33/0 into the blue 33/1?  What I believe I did at this point was to only swap the bogies between the green 33/0 and the blue 33/1 with the result that the green 33/0 now in 00 gauge had gained a realistic top speed and the sprung blue 33/1 was now on a go slow!  During the transfer I had removed the motors from the chassis, but had they also changed places?   I didn’t think so, but I also noted during the transfer process that the blue 33/1 was lubricated with oil rather than the white grease of the green 33/0.   Not a fan of white grease could this be the difference?  As a sense check I swapped the motors over again, and sure enough the blue 33/1 stayed slow, so I laboriously took it apart, cleaned out the white grease and replaced it with oil from my Expo oiler.   On re-assembling  I looked for changes to the worm drive between the models and could see none, and I made sure that no wires were rubbing on the flywheels and gave it a quick blast on my test track where it did seem livelier and freer running on overrun!

Next step South Junction and the now freewheeling 4TC.  Happily I can report that top speed is 90mph and I’m perfectly happy with that!  It is interesting to compare the two models and the weathered 33/1 with Penbits conversion really does look the part whereas the unconverted bogies on the green 33/0 really do have a toylike quality.

Was it the white grease?  Well I reckon so and PeteC has come to the same conclusion about his elderly Heljan Class 33 which is also now lubed with oil, but which also had binding on some drive gears.

Thoughts on the Penbits conversion.

The latest Heljan models including the recently announced revised 33/1 will have a better representation of the inboard sprung bolsters so it may be possible to bypass that part of the Penbits conversion.  I would also query whether there is any point in modelling the invisible and impossibly delicate handbrake linkages. 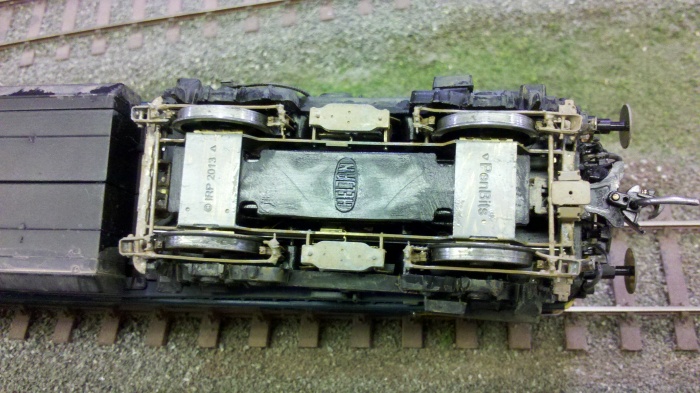 Barely room for those big fat EM Gauge wheels, I did have to omit the inner brake operating linkages as a result.  What a neat and clever design though!

I found the Penbits conversion a joy to build and almost unbelievably well-thought-out.   As reported elsewhere the running qualities of the sprung bogies are very impressive and the instructions superb and easy to follow, it’s really just working out where the best balance of effort vs. benefit can be found;  sadly I don’t need another Crompton for Verwood to confirm my thoughts.   I use Kadee couplings and I found that with a bit of filing I could slide a modified NEM coupling pocket above the ABS shoe at exactly the correct height.  This was so successful and being almost invisible I went on to modify both ends although a #19 Kadee is currently only fitted at the pusher end.

Apologies for the poor photo quality, I will try again with a proper camera!