Boards 3, 4 & 5 have been removed from the front of the layout for sorting out the the ground signals and points. We were a little enthusiastic with the ballasting and need to free them up. The wiring will also be tidied up while we have the chance. It all works, it’ll just look better. Board 5 has been completed. 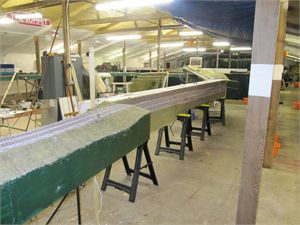 Although we had set the positions of the cameras to cover the front of the layout, actually mounting one of them in the required position would be difficult. Following a re-arrangement of the end cameras to point towards the ends not towards the signal box, a committee of two decided that, after viewing the changes on the screens, the changes were successful. The cameras are also easier to mount in their new position.

Two strings of LED lights were obtained, one white and the other warm white. At £7 each they are not expensive. They were mounted in a white piece of guttering. Once we had found a suitable power supply, each 5m length uses 4A at 12V, we were able to light up part of The Summit to a reasonable level. Warm white was used in the gutter and the next try will be with a strip of white and warm white. It was also decided that what ever support and light we use that it will be usable for all other layouts in CS2.

That’s all for now. See you all sometime.