Another long gap between updates, but with Christmas and New Year well out if the way it’s suddenly time for the YMRG AGM.  This will be the last update with DaveS as Chairman, and time for someone new to boldly chair us into what will be a busy year with South Junction going out twice and Halsdon Road going out for the first time in its extended form at least.   Not to mention scenics for Evercreech New, and all that track laying on Heyno Junction to do…

Track laying continues apace on Heyno Junction and The Bank (TB).  If it’s a race between them to get a loco to complete a circuit, then our money is on TB at the moment.

The Holly Junction crew got the lights to work under the scenic cover of their fiddle yard, and very bright they are too. 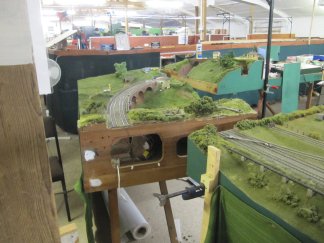 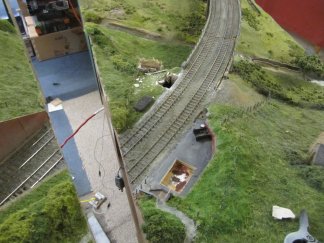 It was easier for Peter to remove the viaduct board of South Junction to sort out the wiring for the new signals.  Pictures show the board out of position and also some of the excavation needed to fit the signal and the rather fine bracket signal that is being fitted.    Peter is also in the process of adding a replacement operating mechanism for further end of the viaduct crossover – after only 35 years the original scale functional point rodding (with temperature compensation) now has too much cumulative wear to throw the point fully.

The huge job of painting Prestleigh Viaduct is now well advanced and it has been removed from its baseboard so that the underside can be painted and weathered.  And yes, Dave H is standing inside the baseboard – just shows how slim he is!    Not to be copied we also show the correct way to hold the very large and hot soldering iron so that should it slip, someone else’s hand will get burnt not yours.  Good health and safety to the fore at CS2! 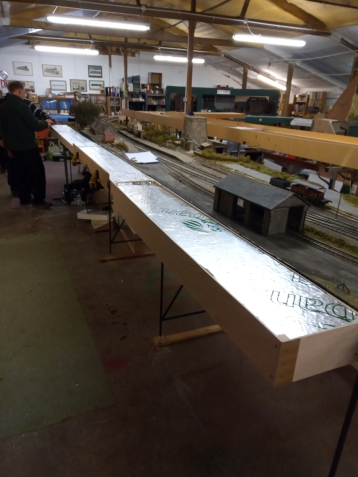 New member Robert hasn’t hung around since joining us and EN has had its front extension made and fitted as a result!   The scheme for the rear scenic boards has also been produced, and at this rate it won’t be long before they make an appearance too.  T-nuts and bolts have been purchased for attaching the boards to the EN originals.

Just before Christmas we have Bob operating the completed Hobson’s Brewery with joystick helped by Dave H – more details here.

And finally Allan has completed his Kingsferry layout and very good it looks too – just those two viaducts to paint on Evercreech New to keep him out of trouble now!